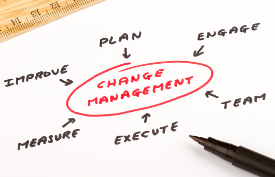 Last month, a few members of Coupa’s expense management team embarked on our first-ever road trip, spanning six states, 3,000+ miles, and a whole lot of fast food meals. We rented an SUV, packed up our trusty mascot Edgar the Eagle, and spent two weeks on an epic loop through the US Southwest, meeting with a dozen customers along the way.

One thing that surprised us was how often the topic of change management came up—as in, everywhere we went. Maybe that shouldn’t be a surprise, because anyone who has ever implemented enterprise software will tell you that change management is the hardest part. Even still, we were surprised by just how much people had to say on this topic.

While all the basics of change management apply to rolling out a travel and expense system, there are some nuances that make it unique. Unlike software that is designed to support a specific department or business process, travel and expense software affects every single employee—and their money. You’ll have people from all over the company, including many who rarely come into contact with enterprise technology, working in the T&E system. And, if the rollout doesn’t go smoothly, many of them will call and email you, because any hitch in the process means the company owes them money. That makes expense management an emotional process as well as a critical business process.

Without further ado, here are the top five lessons we synthesized from our customers who successfully solved the “change management” problem at their organizations, at least as it relates to the rollout of a T&E software system.

Successful Customers Know That Signing the Contract is the Beginning, Not the End.                  There’s a healthy amount of due diligence involved in buying enterprise software (as there should be). When the contract is finally signed, everyone on both sides breathes a sigh of relief.

This is exactly the moment when successful customers shift gears from “contract” mode to “go-live” mode. They work with their vendor to jointly move into a collaborative frame of mind, and they do so very quickly.

While everyone knows this needs to happen, it’s still a big psychological adjustment. What makes it easier is, instead of thinking, "we’ll go buy a system, and then we'll talk about implementing it afterwards," successful customers broke this down into phases and had a complete plan from the very beginning. That included knowing which people from their organizations needed to be involved in each phase, and what type of governance and project management needed to be in place to ensure a successful rollout.

For example, accounts payable teams are the natural owners of expense management systems at most organizations, but procurement departments often assist them during the selection process for a new vendor, and help negotiate the contract. But as soon as that phase is done, Procurement needs to transition away, and other members of the accounts payable team, those who will live in the system every day, must get involved in a big way.

It sounds obvious, but we know from experience that many customers have trouble making this shift, at various points throughout this process.

Successful Customers Know That Expenses Software is for Everyone, Not Just Finance.        Historically, when accounts payable and other groups within the finance function bought software, it was for their own group—a highly quantitative, numbers-savvy group of people.

Expense management software is unique in that it is a tool to make life easier for the entire company, and is also used by the entire company. As we know from experience across hundreds of enterprise customers across the world, this group includes folks who may not even regularly use email. It includes baby boomers, millennials, and every generation in between. It includes iPhone users, Android phone users, and even those who missed the mobile phone revolution altogether.

A successful implementation rests largely on the ability of the accounts payable team to smartly configure the system in a way that balances the needs of the employees and the company.

For example, we spoke with one customer who, in their initial rollout, didn't establish hard spending limits within our system. They didn’t want to kill their culture by being too prescriptive with employees, and felt that employees would revolt. After months of answering way too many questions from employees asking to clarify spending limits, they realized that their colleagues were often confused, and wanted more clarity, and did not see spending limits as a problem.

Another customer we spoke with mentioned that when they initially rolled out their new expenses system, they did not publicize the mobile application because they felt that letting employees expense on the go would lead to more expenses, which would result in more spending, and disrupt their existing processes. However, they got so many complaints from employees seeing the mobile app in the Apple and Android stores that they later changed their approach, and sent a follow-up email publicizing the mobile app to their employees.

Successful Customers Involve Their End Users in the Process Early and Often.
To make sure your new system is configured in a way that works for everyone, including frequent travelers, administrative assistants who support multiple executives, not to mention employees in satellite offices or international locations, consider creating an advisory board of your internal customers, to help you not just evaluate various systems during the sales process, but also after you’ve chosen a system, to help you identify problems and opportunities you might not see from your vantage point in finance. One reason why more organizations don’t do this is that they feel that they are wasting the time of their colleagues in other departments who may only use this system for a few minutes each year. The reality is that even spending as little as fifteen minutes a week on expenses adds up to more than a dozen hours each year. Across an organization of thousands of such employees, this adds up to real money very quickly.

Organizations that involve end users and actively solicit their feedback during the evaluation and subsequent implementation experience have significantly higher user adoption, fewer questions and concerns during the first few months of having a new system live, and much more spend under management in the long term.

Successful Customers Recruit C-Level Executives as Sponsors and Role Models.
The most successful customers also got buy-in from senior executives of the company, who then served as role models for the rest of the company. In fact, we saw three customers that coached their CEOs on how to use Coupa Expenses.

This is so powerful, because in almost every organization, the vast majority of employees look up to their executives, especially those in the C-suite. Any C-level executive actively championing the use of a system does a lot to set the tone for the rest of the organization. C-level executives, by nature, are very busy people. So, if a system is so easy that a CEO can do their own expenses on it, that gives you something to say to any change-resistant employees who don’t like technology and may be reluctant to hop on board.

If you can’t get the CEO, try for the head of sales, or other senior leaders with clout inside the organization whose teams will be using the system frequently. Our customers generally found that it’s best to pick someone outside of finance, to get a broader perspective. We agree.

Successful Customers Use Their New System as an Opportunity to Review and Update Their Processes and Policies.
We’ve talked about the need to involve end users and get the broader organization excited, but to close, let’s turn our attention back to accounts payable and finance. Bringing a new T&E system on board is an opportunity to rethink processes and policies, and look externally for better ideas.

We heard this feedback over and over again from our customers – they worked first to understand all the various levers they could pull with their new system, and they essentially planned out a 12-to-18-month roadmap of which features they wanted to leverage, with their “ideal end state” in mind, and worked hard to bring this to life over time. We like this long-term approach, as it adheres to the spirit of continuous improvement that generally leads to positive outcomes for organizations.

In the end, change management is the bridge between software and realized value for your organization. Given that we are now at the beginning of the third wave of innovation in travel and expense management, ensuring successful implementations and knowing how to drive change at your organization is more important than ever. We hope that some of these tips help you drive the right kind of change and maximize the value you realize from your new T&E system.