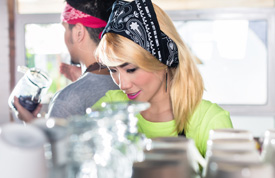 Imagine you go to Starbucks for a decaf latte with whipped cream on top. The barista is very nice and takes your order and your money and hands you an empty cup.

You probably wouldn't be too happy if you had to talk to four people just to get a darn latte. But that’s a pretty good analogy for the spend management challenges you face in a large organization, and a good reflection of how I felt when I joined Juniper Networks as CPO.

Just three weeks into my new job, the CFO invited me in and said, "Hey, I need an analysis on everything we spend in the company except for manufacturing and headcount, and I want it broken down by category and supplier, and for you to tell me what opportunities are.”

A Reasonable Request for a Procurement Officer

That’s an entirely reasonable request from a CFO, but I had never in my career been asked to do that kind of analysis. And, I have to confess, up until that moment it had never occurred to me to do it myself. That lack of leadership in itself is a challenge—for the profession, for finance, and for companies.

I should have been jumping up and down with excitement for having this opportunity dropped in my lap, but I knew it would be incredibly difficult to do what she asked. I actually felt humbled. I thought, "I'm a senior executive and I can't do this." But, she was also a long time friend of mine and I felt like if I didn’t do it, I would be letting her down.

I went right back to my team and said, "We have to be able to show her and everybody else complete reports." They didn’t think we could do it either. But we decided to tackle it, even though I knew there would be many hurdles to overcome and no guarantee of success. We faced four major challenges that I think are the same as those faced by spend and procurement management professionals in most large organizations.

1. Multiple Managers. In any mid to large-size company—not just Juniper—here are probably at least four different people responsible for all the spending the CFO wanted to know about.

Even though my role was “Indirect Chief Procurement Officer” I was only in charge of spending on purchase orders and non-PO backed spend—in layperson’s terms, items people buy where an invoice just shows up after the fact.

2. Data Silos. Each group managing spend has their own systems and their own data. For security reasons, no one person, not even the CPO, has access to all the different systems. So, if you want to pull together all the data, you have to ask people to share it with you.

When you do that, you encounter varying attitudes and degrees of cooperation. It’s not necessarily that people have something to hide—although there’s that possibility—but they don't want their data used in a way that will contradict the way they use it, and confuse people.

Some people may actually view your request as a land grab, as though you’re making an overture to try to take over their part of the business. On the other hand, they might see managing it as a nuisance and practically throw it at you in the hopes that you’ll take over responsibility for it. Or, in the case of the monthly automated spending, no one’s really keeping track of the data at all.

In my quest to get this data, I encountered all of the above. Even with sponsorship from the CFO, it required a lot of persistence and diplomacy to assemble all the data sets.

3. Data Structure. When we did finally get the data, even though it was from four departments we ended up with nine different data sets, each structured to meet a particular reporting need. There were different country and business unit delineations, because without commonality across the company on how we do spend management, reports can be set up in radically different ways.

All these different data structures make it very time consuming and difficult to consolidate the data to arrive at a big picture view, but that’s what has to be done. A report from the travel and expense person would not be accessible to the CFO. It would be like going to Starbucks and getting handed the cup. Ditto for the report from the p-card person and the fixed ops person.

I knew I could not go to the CFO and say, "Okay, here's your report. Here's the cup. Here’s the coffee. Here's the milk. Here's the whipped cream. CFO, you put it together into a latte." That would be a great way to get myself fired. Luckily I found a resource within Juniper that was a whiz at data analysis who helped us pull it all together.

4. P&L Responsibility. Getting the data from everyone and consolidating it is hard enough. When you get to the analysis stage, now you may also encounter resistance from business units that have P&L responsibility. Your analysis potentially gives visibility to overspending or other problems that are happening within these business units.

Now it's not just the back office that's fighting against giving you the data. Now you’ve got business units who are fighting against showing the analysis because it may not show them in a positive light. We had to be very careful to position this as, "Hey, this is just a value added report for you so you can make better decisions yourself." You can’t be seen as the spend police because people will just shut you down. They won't help you, and you won’t be able to help them either.

Kudos Around the Globe

Ultimately we were able to deliver a 10-page report outlining spending from soup to nuts, regardless of how the money was spent, cut by all the dimensions the CFO wanted to see, and outlining all of the opportunities. We also iterated what we called “Informed Spend Reports,” which were more detailed versions for the business units.

These reports had a major positive effect on the company and on our group. In fact, we got a lot of kudos and mentions in everything from monthly reports all the way up to the CFO mentioning and recommending them at an all-hands meeting for thousands of local people in an auditorium and hundreds more on the phone in faraway countries. Talk about elevating the procurement organization!

Really, the CFO gave me and my team an incredible opportunity, one that every procurement organization should pursue proactively. No one else in the company has the skills to look across spending company wide and help the company get all the benefits it can.

When I worked at Sun Microsystems and went to different countries to meet with business leaders, I would present my data and they would ask questions such as, "Where is our spending on hotels?" and I would say, "Oh, yeah, spending on hotels, that’s in our travel and expense reporting system.” I would get a blank stare. I knew they were thinking, "Why didn't you bring it?"

I can imagine now how a business leader might see that, but at the time there was such an ingrained delineation between my role and those other roles that I felt perfectly comfortable saying it was not my job to provide that information.

But now, there’s an evolution that’s happening where we’re starting to see that same level of sophistication applied to indirect spending. Thankfully there are new spend and procurement management platforms that integrate and handle everything from purchase orders to invoices, to fixed payments, and travel and entertainment expenses. They also can integrate the purchasing card and the travel and entertainment credit card spending.

It’s time to get out of the “make your own latte” model of spend management. Don’t wait for an org change, or for someone to ask you for a company wide report.  More and more people are going to be probing into this.

Fortunately, I had executive sponsorship from a very smart CFO who realized there was an opportunity, and knew what questions to ask. Her request was matter-of-fact, as though this was just a normal request for run of the mill information that any CPO should be able to provide, and that made something click inside my head and made me think differently.

But don’t be caught flat-footed like I was. This is an opportunity for procurement to step up. If we don't grab it and do this innovative work, we will continue to be seen as tactical players in the back office. We won’t get that seat at the table, and we’ll be seen as laggards down the road, straggling along with our empty paper cups.