A Five-Step Plan for Procurement to Shine During Economic Uncertainty 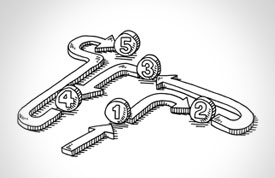 Now that the US election has been decided, one major source of economic uncertainty has been eliminated, but many others remain. Our new president faces many challenges, and we have new senators and congress people and I hope, soon, a new Supreme Court justice. So, things are not exactly settled, and that makes it hard to plan. In a recent study, more than a third of US CFOs said they are slowing their spending plans due to political uncertainty.

I’m not comfortable playing economist or political prognosticator, but what I do know is this: the economy is cyclical. We’ve had many quarters of slow growth, and amidst all this uncertainty, the economy is moving forward on a stale green light. What that means for procurement is that at some point our main focus is going to shift back to cost cutting. The time to start preparing for that shift is now, since it’s annual planning season anyhow.

Traditionally, procurement sits back and waits. But the business can’t wait. When they have financial problems, they want to make decisions quickly. In the absence of recommendations from procurement, management falls back to their old standbys: Cut back on travel, eliminate Post-It notes and put a moratorium on laptop upgrades. Then procurement is left wondering why no one bothered to ask them for better ideas.

When I was CPO at Juniper Networks, I once did a complete analysis showing that cutting back in those areas wouldn’t yield big savings, but I was fighting an uphill battle because by then, those decisions had already been made. So, I learned to anticipate and get out ahead with my recommendations.

The great news is that CFOs always have their ears perked up for changes in mood and sentiment, and most of them are pretty good at pulling back on spending in times of uncertainty. They want to be ahead of the curve, because they know that once something does happen, it takes too long to catch up. If you’re out ahead of the curve too, you’ll find they’re receptive to your ideas.

So, it’s time to get out of reactive mode, cast excuses aside and be prepared to provide value to the business no matter what happens. Here it is, your five-step plan to always being prepared in an uncertain economy.

There is no one right area to target for cost cutting. Procurement has to do a full analysis of spending to identify the right areas to target for their own company. I’m talking about stand-back, strategic analysis. You know, the kind you never seem to get to because you’re consumed by tactical, day-to-day functional requirements.

Ideally, with Fall being planning season for most companies, you’ve already set aside some time for this. If not, say no to some projects you might normally say yes to, because your global commodity managers are going to have to analyze their specific verticals, and you as a leader are going to have to put some time into this too. Don’t push it off.  Every year I used to set aside time for a two-day strategic planning meeting with my global commodity managers to anticipate upcoming spend areas and work on proactive strategies for either sourcing new areas or cutting costs in existing areas.

2. Work with the tools you have

We all have the same problem: We don’t have perfect data. If you already have a spend management platform such as Coupa, you’re in better shape because you have all the data in one place, and some analytical tools to help you make sense of it. But, you still need to turn data into information with some additional analysis and recommendations.

If you don't have the perfect tools yet, move forward anyhow. We all can use Excel. It's not pretty and it takes more time, so plan accordingly. But don’t use the lack of perfect tools as an excuse. Get the data from whatever sources you have and do the analysis in Excel. Pull in some financial analysts to help.

One thing I’ve learned from experience: don’t take so much time collecting the data that you run out of time to analyze it and pull together your recommendations. Set a time limit to get the data, roughly one-third of the total time. Once you hit that point, do the best analysis you can on that data. I guarantee you’ll have better recommendations than if you used all your time collecting every last bit of data.

We all have the smarts to do this. Where's the company spending money? Is it consolidated? Is there more leverage? Are there some markets that are softer, like travel or IT, where you can find better deals? It’s really just procurement 101.

3. Work with the information you have now

We like to talk about aligning with the business, but at this time of year if you go to a business leader and ask what they’re going to be working on in the coming year, they’re probably going to say, “We won't know that until the end of the planning process.” I’ve had that experience many times. They’re even less likely to know what they might do if they suddenly had to cut costs.

It’s frustrating, because if you wait until they have their strategy in place, they've already locked in decisions without any information about how they could leverage the company’s buying power and optimize their spending. So, forget about that approach to alignment.

You need to already know what they’re going to spend on next year. Now, I’m not suggesting you look in a crystal ball. The reality is that about 75 percent of whatever they did last year, they will also do this year. There may be one or two new strategy initiatives that come up in planning. That's okay. Those will be opportunities you can go after later.

Do your homework on what their focus has been during the current year. At this point, there will be lots of information available on that. You don’t need to know 100 percent of their strategy for next year in order to do great analysis and recommendations. It’s better to proactively come up with a plan that’s 80 percent right, and adjust the 20 percent that’s wrong, than it is to do nothing.

I go to about three procurement conferences a year because I love hearing the new ideas from the speakers. But at the same time, around the lunch and dinner tables, I continue to hear the same gripe year after year: "No one pays attention to my ideas and recommendations."

Don’t let that be an excuse for not doing this work. Instead, allow time for refining your presentation. You can’t just throw data at people, or go charging in with 100 lines of procurement speak on a slide. Most people don’t react well to that. I’ve seen plenty of good analysis go to waste because it was presented in a way that didn’t resonate with business leaders, which always is such a shame.

We have to get better at communication and selling to our internal stakeholders. Think like a marketing person. Think like a sales person. Your job is to look at the data, extract insight and put it in a format that’s easily digestible to business leaders using charts, graphs, and such.

My rule of thumb has always been that the presentation should be understandable to my mother. She has a masters degree and is a very smart woman, but knows nothing about procurement. Neither do any of your stakeholders. This isn’t “dumbing it down,” as people have sometimes suggested to me. In fact, presenting complicated information clearly is just the opposite of that. Telling a coherent story of the data findings, analysis, and recommendations that anyone can follow is hard to do, and takes time.

Make sure you put your recommendations in the context of each leader’s business goals. The only way to do that is to understand what those goals are and then show how your recommendation for smarter spending or leverage from suppliers supports them.

If you’re presenting to the CIO for example, don’t just go in there and say, "I can get a cheaper price on routers." That's a yawner. But if the CIO is trying to outsource IT staff in order to lower costs, then less expensive routers that have better management tools might help enable that strategy.

I recommend a very simple, 1-2-3 format. First, put their business goal at the top. Then you’ve got their attention. Second, don't beat around the bush. Just tell them what the damn recommendation is. Third, show how you came to your conclusion. The fewer words you use, the better. Graphical representations convey more information, faster.

That's it. With this approach, you’ll get a lot more traction as people see and understand your recommendations, appreciate them, and ask for your help with implementation.

No matter what you think is going to happen with the economy or with your business in the coming year, now is the time to do this exercise. There’s really nothing to lose. If it’s smooth sailing ahead, at the very least you’ll have made a valuable contribution to annual planning and you’ll already have your inputs in for the year ahead.

And if the economy softens, we know our executives will be looking for us to help. This an excellent time for procurement to shine, and there’s no better way to do it than to already have done the analysis and have your recommendations ready at hand.

David Hearn is a procurement consultant and a member of the Coupa Executive Advisory Board. He was the Indirect CPO at Juniper Networks, Sun Microsystems and Kaiser Permanente.