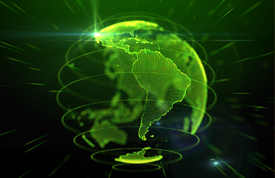 Ten years ago, the VAT gap—the difference between the value added tax governments should collect based on business transactions going on in their country, and what they actually do collect—was a side note to economic discussions in most countries. Now, because of the shortage of money within governments across Europe, closing the VAT gap, which was over €150 billion in 2015, has now become a central topic for European governments.

Inspired by the success of Mexico’s clearance model, which has helped the government there dramatically increase tax collection and reduce the shadow economy, many EU countries are looking to establish government-controlled invoicing environments, with some moving forward with mandates. For example, Italy already requires e-invoicing for business to government transactions, and may mandate electronic B2B invoicing as soon as 2018.

That's a big step forward for a European member state that was previously lukewarm toward e-invoicing directives, so we can see how the market is shifting. We also see various governments including Spain and Hungary mandating real time VAT reporting, which effectively requires electronic invoicing, as this cannot be done in a paper environment.

These decisions have been made. The time frames aren’t entirely clear yet, but it’s safe to say it will all happen on this side of 2020. Every company that has a legal entity in Europe is going to face the consequences if they're not moving forward with electronic invoicing by that time.

Mandate or no, you may want to start implementing e-invoicing now anyway. Mexico’s success with the clearance model goes beyond just reducing tax evasion. E-invoicing schemes like this are starting to reshape cross border trade. As more countries hop on board, trading partners that don’t have e-invoicing may be left out in the cold.

So, what is the Mexican clearance model?

Every government has a finance ministry or taxing authority that is monitoring business and trade in the market. In theory, they have sufficient controls in place to ensure that businesses are following the rules and paying what they owe. But in practice, it’s almost impossible to have enough people on the ground to monitor every business and enforce the rules, resulting in large scale tax fraud.

In the Mexican clearance model, invoices are no longer raised by the supplier, which is the traditional model. Instead, government approved agents issue electronic invoices based on data provided by the supplier. All transactions are cleared through the government, which collects the value added tax as the money changes hands.

The government also has the ability to exclude suppliers from creating invoices. If a supplier hasn't paid their tax duties, or met other tax administration rules or deadlines, they can be blacklisted and prevented from raising invoices. Effectively, they are out of business until they have met their legal obligations. This gives the government a lot of power to prevent businesses from bypassing the rules, and to collect the taxes they are owed.

Mexico started working on this model in the early 2000s, and implemented a mandate from 2010 onwards. The mandate initially targeted the biggest organizations, and then upon this whole thing working smoothly, they lowered the threshold and are now mandating the use of this kind of model for every single tax paying entity in Mexico earning more than 250,00 MXN (US$12,500).

Even if you just have a newspaper stand on the street in Mexico City, you are required to report every single transaction to the government through the infrastructure that they have put up. It's an end to end closed loop. The results are impressive: The government is handling over 10 billion electronic invoices annually, and has increased tax collection by 34 percent.

In government circles, Mexico has just come out with a new success story stating they have reduced the shadow economy by another four percent, for a 50 percent total reduction over the life of the initiative. That is massive considering the size of the Mexican market. They have now closed the VAT gap by an amount equivalent to 21 percent of the country’s annual budget, and they cite the clearance model they have implemented in the invoicing sector as the number one reason for this success. This is what European governments are now looking to replicate in their own countries.

Countries that adopted and mandated e-invoicing early are now moving beyond implementation on a national level, and again Latin America is leading the way. In controlled clearance models, where governments have full visibility into and control over transactions, trading partners are beginning to leverage e-invoicing schemes to facilitate more efficient trade.

The idea is that if partners have that kind of control, they can create some kind of interchange format between their clearance systems so they don't have to worry about tax and customs documentation being manipulated for fraudulent purposes.

Mexico and Brazil are early adopters of this type of scheme, working toward a system where cross-border trade between Mexico and Brazil does not require customs documentation because every transaction is tracked and traced between the two systems. That is a massive step forward in terms of trade facilitation that is being built on the e-invoicing infrastructure.

Interestingly, there are two countries in Europe that are now slowly moving towards this same kind of system that also happen to speak Spanish and Portuguese—Spain and Portugal. They have strong ties to Mexico and Brazil, and the next project that is on the horizon is to run a pilot between Mexico, Brazil, Portugal and Spain for cross-border trade and acceptance on the basis of a connected e-invoicing infrastructure.

To imagine what kind of impact this could have, think back to a couple of decades ago when money transfers between countries could sometimes take weeks. We whittled that down to a few days, and today, we are working on systems where these kinds of money transfers can happen almost instantaneously, so there is no delay in the process from a payment standpoint. With a connected e-invoicing structure, we could soon eliminate customs delays.

Throughout the history of e-invoicing, it has been difficult for individual corporations to make the transition to e-invoicing, despite the many benefits of optimizing this process. Now we have governments around the world who can clearly see the prospect of billions of dollars in revenue that they are justly owed within their grasp. It’s only a matter of time until e-invoicing is mandatory in countries across the globe.

If the benefits of e-invoicing aren’t enough to motivate businesses to make the change, that prospect should be. In a mandated scenario, you are forced to go along or pay the price. It becomes more expensive and disruptive if you wait for this to happen. Just the redesign and the reengineering of existing AP processes will take at least a year or two to one and a half years.

If you wait until legislation is passed, you will most likely have to implement e-invoicing in a considerably shorter timeframe.

In some countries, there is abundant information to move forward, and in others, the details aren’t quite clear yet. But that is no reason to wait. E-invoicing is a re-engineering and digitization of the entire procure to pay process that companies will have to undertake at some point in time if they want to remain competitive in a digital world. It is also becoming increasingly clear that it is also the price of entry into a new, efficient, digitized era of global trade. The time to start finding systems and partners to guide you on this journey is now.