Andy is the product manager for Coupa Invoicing and Coupa Sourcing. Prior to Coupa, Andy worked in strategic sourcing and supply chain at Gap Inc. When not at work, he enjoys sourcing honey from his home apiary.

E-sourcing is a must for the modern sourcing professional, but sometimes it falls by the wayside due to the press of business. Running an e-sourcing event is a great reminder that the time and money you save with e-sourcing makes it well worth investing in mastering the process.

Such was the case with an e-sourcing event I recently helped run for a large U.S. services company. They needed to replace the copiers in 2,000 locations across the country over the next few years, at a cost of a few million dollars.

The team there had dabbled in e-sourcing in the past with positive results, but still mostly relied on Excel and email for sourcing management. With copiers being one of their largest areas of indirect spend and the current contract about to expire, they decided to take part in Coupa’s QuickStart sourcing program. Through the program, Coupa Procurement customers get a free 30-day trial of our sourcing module, along with free expert assistance to launch their first e-sourcing event using the tool.

For this event, we ran it in two-stages: an RFP to consider non-price factors, followed by a reverse auction to find the best price for the copiers. In a reverse auction, bidders compete by lowering their prices, as opposed to a forward auction where each new bid is higher than the last.

To run a successful reverse auction, there’s a bit of work that has to be done up front. To start, I helped the internal team draft and send out the RFP to seven vendors, a mix of manufacturers and distributors, including the incumbent. It was a pretty straightforward RFP, just eight pre-bid questions to qualify the bidders and make sure they understood the rules and wanted to participate.

As often happens, after sending out the RFP, the incumbent supplier came back and said, "Hey, you don't need to do this electronic sourcing. Just re-sign with us, and we'll give you a discount." This can be an enticing offer, but what it usually means is that they know that if you put it to auction they'll have to reduce their price even more.

All seven vendors qualified and wanted to participate. Through the RFP we were able to figure out that some suppliers were bidding with accessories included, and some without. In fact, the biggest challenge for this event was getting all the bidders on the same page. The incumbent had supplied the firm with ten different models of copiers, so we also had to make sure everyone would be bidding apples to apples. Copiers come in so many shapes, sizes and speeds– from light duty desktop units to industrial copiers slightly smaller than a chest freezer – and can include scanners, printers and faxes or combinations thereof, so getting everyone aligned was a bit tricky.

We decided to include in the e-sourcing RFP a detailed spec sheet for each of these ten copy machines and tell them that they needed to quote for comparable machines in their initial proposal. This also included a pre-bid, which is helpful not only to allow the buyer to get a feel for the various price points, but to make sure that all the vendors know exactly what they’re bidding on. For example, we saw one vendor submit a pre-bid that was dramatically lower than the rest of the field. It turned out they thought they were bidding for a 12-month contract, when we were looking for 36 months. If we had skipped the pre-bid and they had gone into the auction with this assumption, it would have wrecked the bidding and we’d have to re-do the whole thing.

Pre-bids are for the buyers’ eyes only, but once the auction starts, you can use the e-sourcing tool to make bidding totally transparent to all parties. Suppliers can see how they rank against their competitors, which drives the competition. The buyer can also use the tool to allow for public comment, which really streamlines the process. If one of the bidders asks, “Should we bid on accessories?” we’ll answer to all suppliers, “The question was, should I bid on accessories? The answer is no, you should bid only on the copier," and everyone has the benefit of that information.

One advantage of using e-sourcing is that while it is timed, the auction won’t actually end until five minutes after the last bid, (or longer or shorter) if you want to configure it that way. This prevents sniping, in which a supplier swoops in at the final moment to undercut the low bidder, when that bidder may have been willing to go even lower. In this event, the auction went 20 minutes over the half-hour we’d allowed. 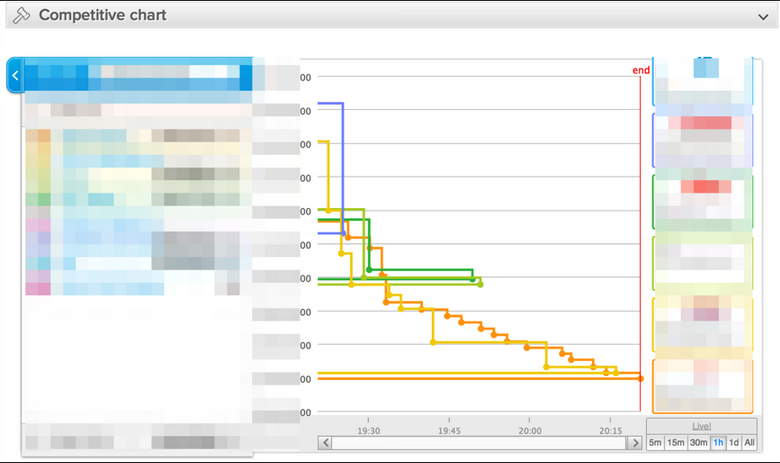 The reverse auction was hotly contested by the final two suppliers.

If you think this sounds like a frenzy of last-minute bidding, well . . . you’re not wrong. This is fairly typical in reverse auctions. Pitting suppliers head-to-head in real time creates a sense of urgency that often leads to a scramble to finish with the low bid. It’s a fun process, at least on the buying side, and enlightening for most buyers who’ve never done it before.

In the end, we had two suppliers duking it out, shaving off price points well past the official stop time. Both ended up offering about 14 percent savings, which was much better than the incumbent’s initial discount offer.

The purpose of the reverse auction in this case was to get every supplier’s best price. Then it's ultimately up to the buyer to decide based on the pricing and answers to the RFP questions who they want to go with.

The reverse auction put our client in a great position to strategically award a new copier contract. They received two proposals offering substantial cash savings, and better yet, the e-sourcing tool condensed what is normally a weeks-long process of negotiating with suppliers into an afternoon. The buyer achieved significant savings, and because everything took place in the e-sourcing tool, they’ll have easy access to all the back and forth communication, pricing and other RFP information which they can re-use for subsequent events, saving even more time and money in the future.