Paul Tuxford is a technology thought leader in Europe, and the former CIO of The Global Fund. 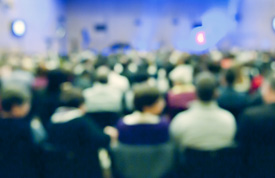 I’ve been an Oracle customer for the last 18 years and over the course of my career, I’ve been to Oracle Open World at least half a dozen times. This was my first time back to San Francisco for the conference after a six-year hiatus. A few things have changed, and a few have stayed the same.

It’s still a big, brash, complicated event with Oracle putting out their view on where Oracle is, and where the industry is and where it's going—as it relates to Oracle.

The event is up to over 60,000 attendees now, the equivalent of a small city, but it runs like a well-oiled machine. What I noticed this year is that there were a lot more specialist groups in attendance. There are a lot more functions and capacities represented, and I think those have come in with all the acquisitions Oracle has done over the past few years.

But, with Larry Ellison at the helm as the CTO, it's still very much a technical conference, as opposed to say Salesforce.com’s Dreamforce, which is more on the business side. OOW is packed with lots of high-end technical users attending and everybody is talking tech, from storage and chips to ERP business applications.

For me, coming from Europe, it's actually very useful to hear directly from the people who are creating the technology what the trends are going to be in a couple of years' time.

There’s no way to cover it all, so I didn’t delve into the application tracks, sticking mainly with the keynotes from Oracle and partner company executives.

From that vantage point, here’s what I thought was noteworthy.

Late to the cloud

First, Oracle was very late to the cloud, and consciously so. I think as an organization, they didn’t think the cloud was actually going to happen, and they were surprised that it has happened in quite the way that it has. But now, they've doubled down on it. They've really looked inside for where their key capabilities are within their own organization, and have applied them to the cloud.

They now have an opportunity to leapfrog some of their competitors. I see Oracle doing “cloud 2.0” in a smart way, with tools that are built for enterprise. Firstly you're looking at the Oracle database, which is the best commercial database in the market and it has been the leader for more than ten years. Secondly, there are their Java application platforms packaged into the essential middleware layer. The third thing is their hardware for network computing, which they've brought in with the Sun acquisition.

They've taken all of those and designed, almost from the bottom up, a cloud platform that will meet the needs of a lot of their customers and scale up as the organizations that use them do.

I can see Oracle being more open than some of their competitors and that will actually lead them to take a greater market share in time.

It was interesting to listen to them talk about the evolutions of their applications businesses and the competitive market behind them. Oracle does see themselves as the market leader in both human capital management and ERP and can see themselves leapfrogging with their supply chain products.

We also heard a lot about Amazon, and it’s clear that’s who they’re going after with their infrastructure as a service.

There was also a lot of talk about security. As more applications are hosted outside of a corporate firewall, addressing security becomes a critical enabler for all of this to actually happen.

Oracle clearly sees security as being a major differentiator for themselves, and they announced the acquisition of Palerra, which provides security automation for enterprise apps.

This is obviously not something you can just tick off with an acquisition. Security, privacy, identity and certifications are an important and growing area of concern. But they are signaling that they see this is important for their reputation and to actually ensure that there is take-up from customers in actually moving to the cloud. Security fears are never going to go away, and suspect they will continue to invest and have those conversations as the landscape evolves.

Opportunity for the agile

As this mega vendor doubles down on the cloud, best of breed applications companies have agility as an advantage, but will have to innovate more quickly, provide more value and differentiate themselves more clearly to stay ahead.

And that’s what CIOs need to keep in mind as all this evolves. You need to have core platforms within your organization, and also make conscious decisions to consciously deviate from the applications strategy where there is a compelling business need. It’s such a fast moving space, literally changing quarter by quarter, but application decisions should always come down to not what’s new and shiny, but what you actually need to do as a business. That, I think, will never change.