The View from the Cloud

Bob has more than 25 years of experience leading high performance IT teams and contributing business value through the adoption of progressive technologies. 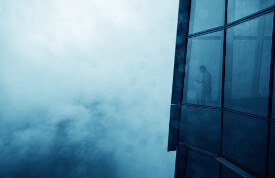 Back in 2005, while working for Sun Microsystems, I was delivering a keynote at a computing event in Moscow. One of the slides in my presentation outlined how IT would move from being the builder of things to being the aggregator and integrator of things. It was an innocuous sounding argument, but there was a deeper agenda: make the IT professionals in the audience uncomfortable and help them realize that the IT of the future was going to revolve around this thing called utility computing—what we now call cloud computing.

The slide helped accomplish that mission. There was a bit of shock and awe from the audience, along with questions and pushback. We were told that this so-called “cloud computing” would never happen – at least not in the way we said it would. But the idea that you could use computers in the same way you could use power coming out of the wall - only paying for what you used - was something we had been envisioning and talking about at Sun for a long time. “The network is the computer,” was the phrase that we used, back in the day.

Even if the audience in Moscow couldn’t see this vision, we could. We were watching the rise of Salesforce and other young upstarts in the SaaS world. I recall thinking, “either we're crazy, or the rest of the world is.” I had enough conviction to believe we were the ones who were right.

Indoctrinated Into the Cloud
By the time I left Sun when it was acquired in 2010, there was no longer any internal debate about the shape of things to come - we knew we were right. When I interviewed for my current role here at Juniper Networks I learned that their board had made a strategic decision to move all of the company’s IT operations, including internal corporate applications and data to the cloud. This was in alignment with my belief that the cloud was the way forward. Juniper had already begun to make strides towards its cloud vision and, since joining, I have had the pleasure of assuming a leadership role in both the vision and the execution of the vision of cloud-only solutions.

So where are we today? Well I’m happy to report that the transition of Juniper’s IT operations to the cloud is virtually complete. Almost all of Juniper’s internal corporate applications and data have been shifted to the cloud, either as software as a service, infrastructure as a service, or platform as a service. We’re down to a couple of applications left in a small data center that are on track to transition by next summer.

Still Struggling
My message to organizations that are still struggling with this transition remains unchanged: there is no longer a debate, the cloud is here to stay. So, get started with your journey. We now have at least three generations of workers in the office - baby boomers, GenX and millennials. When it comes to cloud, it’s best to take a cue from millennials who have embraced the cloud wholeheartedly.

There are four dimensions for organizations to consider as they start their journey. The first is cost. Yes, one of the selling points of a shift to the cloud is that it can be less expensive – the caveat being that it has to be planned, budgeted and rolled out in a way that makes it more efficient.

The second consideration is security. Some in IT still worry about security in the cloud. One of the benefits of the cloud is that you can gain access to external security professionals in addition to your existing in-house resources.

The third consideration is agility. This may be the single biggest benefit derived from the cloud – agility and speed to market.

The fourth consideration is the providers. It can feel like a game of roulette where you’re gambling the future of your organization on one of the many providers. There are a number of possibilities, including Amazon, Azure, Google and IBM. The key is finding the right provider to scale along with you as your organization grows.

When, Not If
There’s another set of considerations around the “what” and “when” of the cloud.

The question of what to move to the cloud has gotten a little bit easier as markets have matured. There are many good choices, and clear winners in many spaces. What every company has to decide is how far down the application stack to go. There’s a case to be made that everything required to run your most common business processes can now be shifted to the cloud.

For most companies, it’s not if they will be moving to the cloud, but when. The question of “when” comes down to order of operations. Exceptions may include financial services or security companies, as well as healthcare organizations. These organizations have data and intellectual property that may require them to forgo potential cost savings or agility gains the cloud may offer and maintain those assets in their own data center.

Becoming Strategic
With the rise of the cloud, IT is being asked to think differently. Historically, all projects were considered ‘in-house’ so there was not a lot of debate whether to build or outsource – the question was more along the lines of the number of servers that would have to be purchased and how large of a data center needed to be built.

Today, IT has moved to a more strategic role where they are tasked with evaluating what to do with their organizations most valuable asset: its data. The cloud is a great tool for agility, cost savings, security and scale – but any strategy starts with trust.

As organizations explore these considerations, it’s important to align with senior leaders to determine what the appetite for change is – because without a willingness from the c-suite, your journey to the cloud may be over before it begins.