The One Thing That Changes When Your Company Goes Public 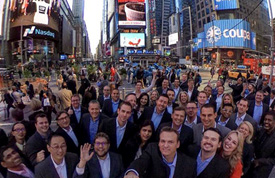 Earlier this year, Coupa went public. Making the decision to go public was something we considered very carefully and we were very pleased with the reception we received from investors in the market. But, there’s not a whole lot that has changed since our IPO, other than that now we publicly report our earnings.

Probably the biggest thing that’s changed is that instead of constantly being asked, “When are you going to go public,” now I’m constantly asked, “What’s it like being a public company?”

For some people, it’s just a polite question, like “How was your holiday weekend?” But for others, they’re really trying to understand something deeper. I think there are at least five things that are perhaps really on their minds when they ask that question, particularly if they themselves are considering an IPO for their companies:

One thing that people may be wondering is if their entrepreneurial culture will be crushed by corporate politics. Will the company become processes-heavy? Will compliance, budgeting and approval processes slow everything down? As teams grow, will consensus building compromise innovation? Will office politics become a cesspool of blame shifting and not-my-jobism? Perhaps there is a greater likelihood of these viruses infecting your organization as it grows. But, that is not just a public vs. private company matter.

Startups are certainly not immune to these kinds of problems, but as companies grow, there’s undeniably a greater tendency for people to engage in those ways, so you have to be vigilant. The CEO and leadership team have to double down on efforts to ground everybody in the long-term vision, culture and values that led to your success in the first place. Those are what should carry you forward.

There's a high likelihood that the type of people that would be applying to work at a public company rather than a startup company are different. But, that doesn’t mean that one is necessarily better than the other.

You may be tempted to try to keep things as they were by continuing to only recruit scrappy, highly agile, very ambitious kinds of people, the kind you were probably seeking when you were initially building up the company. But really, the company is different--not just because it’s public but because it’s bigger and more mature--and the talent mix should reflect that.

At the same time, don't overcorrect and bring in people just because they have big company experience. That too can certainly stifle a developing culture. Be as mindful as you were in the past about getting the right mix of individuals as the company continues to evolve.

The money and the glory associated with an IPO will definitely change the way some people see themselves, and the way they interact with others. It’s critical that leadership rein in people that start acting like hotshots, and fast.

This is no time to get cocky. If anything, it’s time to get humble. If you made it this far, the branch you’re holding up is about to get heavier. It’s time to build up your strength, not rest on your laurels or lord it over the newcomers.

A newly public company with several hundred employees and a few hundred million in revenue is an ant on the world stage. Whenever change happens, people need new perspectives. It’s up to leadership to provide them.

The other thing leadership needs to be on the lookout for are people who have reached their level of incompetence. They were VP of XYZ in a 60-person startup, and now they’re VP of XYZ in a 600-person public company and they’re potentially in over their head.

In a high growth company, you automatically have a Peter Principle dynamic happening. You should be continually on the lookout, at every level of the company, including all key players on a management team, even the CEO, to make sure you have the right people in the job. If not, somebody else should come in. There’s no room for ego.

In some newly public companies, some people sit and watch the stock ticker all the time. They have this new dashboard in front of them, and it’s addictive. Their outlook becomes driven by their sense of how well the company is doing based on this single external measure which they can’t control.

If the stock is up they’re patting themselves on the back. If it’s down, they’re hunting for a new job. They become short term-oriented, focusing purely on that next quota at the expense of building for the long-term. They become myopically focused on the money. You don’t have to be Colombo to see that coming, and you have to constantly be on guard against that.

At our first all hands after our IPO, I showed a stock chart and told everyone, "I'm not going to get up here every time the stock goes down and tell you we’re okay. And if it goes up, I’m not going to tell you everything is so, so great. We're trying to do something special and build long-term value. The stock is going to go up and down all along the way.”

I also asked for a show of hands of those who were in it for the long term. Everyone raised their hands, but maybe some not so fast or enthusiastically as others. People need to think about whether they really want to be there, and leadership needs to catch disengaged ticker watchers before they poison the culture.

Everything you do now, you do in public and that seems like a higher level of pressure to some people. I don’t see it that way. As a startup, we made a commitment to a small group of investors to do certain things and run the business in certain ways. As we grew, we made more, similar commitments to a bigger group of investors.

You do what you commit to doing with the resources you have to create the most value possible for shareholders and stakeholders. Expanding that commitment to an even broader base of people doesn't change the pressure we feel to meet it. It's like adding another zero to the digits in the numerator and denominator in a fraction. The proportionality remains the same.

If you stumble, it will definitely be more public, but anybody who's built a company to the point where it could go public has stumbled publicly many times, has overcome many setbacks and has been called on the carpet on more than one occasion and survived. You can handle the pressure.

These are some of the things I think people are really asking when they ask me, “So how is it being a public company?” The easy answer it’s the same. Nothing really changes, because the reality is that in a high growth company, things are constantly changing. Going public is just a big change that happens in one day and everyone notices. Yes, there may be some specific challenges that come out of that, but if you’ve been doing your job all along, and you’ve made it to this point, you have nothing to worry about, beyond what you’ve always worried about: How to build a great company!