The role of the CFO is morphing into an operational and strategic one, and the title may one day disappear from org charts entirely. That was the premise of a recent Coupa-sponsored CFO Publishing webcast, "Chief Operating Officers in Disguise: The Rise of the Modern CFO."

CFOs Tyler Sloat of Zuora and Todd Ford of Coupa shared their experiences on how their roles are changing, and they apparently struck a chord. In a flash poll of over 300 attendees, nearly 87 percent agreed that the finance team’s sphere of influence is expanding beyond its traditional scope: 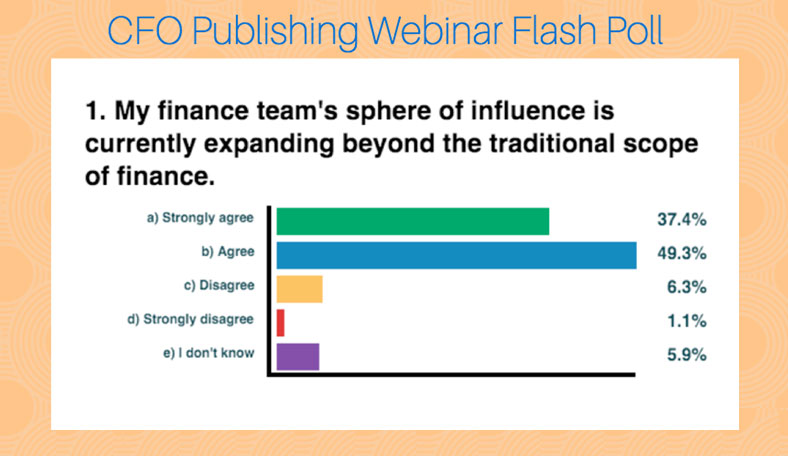 What does this new sphere of influence encompass? Both presenters were quick to say that governance, compliance and financial reporting are still very much part of the role, but are now seen as “table stakes,” but the role no longer ends there. More is expected.

The bigger change though is the proliferation of real-time data, and its use in decision making. This is thrusting the CFO beyond backward-looking reporting and into the role of trusted business advisor to various functional units.

“The CFO has all the data,” said Sloat. “They understand functional benchmarks and can work with functional leaders and sometimes even run those functions because they have a good understating of where those functions should be. I see that in my own career, managing everything from sales to technical operations, to product operations, and also in the CFOs I talk to and what they're being asked to do and how they're being asked to contribute to their own businesses.”

Ford says the CFO is becoming more like a COO “because predicting the future requires you to have deep operational expertise. You need to be really rooted in everything that’s happening in the company.”

Few in the audience disagreed with that assessment:

The CFO is now responsible for some of the operations of the business. Ford said that to him that means responsibility “for the business model, which in my mind is completely distinct from the budget.” It includes things like the go-forward plan, strategic initiatives and investments.

Finance always touched on every organization through the budget process, but the role is becoming more collaborative and cross-functional.

This requires CFOs to have a lot more background in business, and the traditional path to the role through public accounting is no longer the only valid path. Many in the audience wanted to know what skills and experience are needed to become a modern CFO.

Both Ford and Sloat agreed you can’t lose track of financial acumen and the technical accounting piece, and to that end, both recommended their time in public accounting. FP&A experience, with an emphasis on data analysis, could be beneficial, as could an MBA. Beyond that, they advised seeking out cross-functional experience in technical or operational areas. Experience in corporate development, consulting, investment banking or even as GM of a business unit could be valuable experience for a future CFO. What’s clear is that modern CFOs need to have skills and experience outside the accounting role.

“Instead of doing your reporting and just saying, ‘Here's what changed and here's how it's different from last quarter,’ you have to dig in to what’s going on with the business and figure out why, and try to influence a different behavior if you don't like results,” said Ford. “That's what I think the expectations of the C-suite are today for the CFO.”

In fact, it’s this breadth of skills and experience needed that leads some to believe that the role of CFO may start to disappear from org charts over the next decade or so, although fewer participants were willing to go that far:

What may be more likely: The role will be divvied up in different ways.

Sloat is one of those that think finance, because of its focus on numbers, data and results, will end up taking over operations. But, he says, “There are titles. There are roles. We can talk about it all day long. I think the important take away is the role of the CFO is becoming much more cross-functional and operational. It's really about the changing expectations, and what they're supposed to be doing within the organization.”