The Best Leadership Skill I Ever Learned: Emotional Intelligence 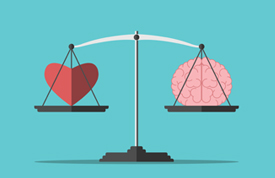 What is the number one thing that can elevate procurement professionals to the strategic leadership roles they desire? It’s not writing better RFPs, or doing better sourcing or bidding. It’s developing and using emotional intelligence.

I’m the poster child for this. When I started in procurement 30 years ago, I had an emotional intelligence score of eight out of 100. Once I started developing and using my emotional intelligence, my career took off, my personal relationships got better and I even started enjoying life more. This is the single most important skill I’ve ever learned because it’s been the key to using all my other skills effectively.

What is emotional intelligence? Simply put, understanding what’s important to other people.

I used to think this was a complete waste of energy. It took a long time and a lot of painful experiences for me to decide this was something I needed to work on, and then it took me a few decades to get really good at it. But it doesn’t have to take you that long. If a guy like me can learn this, you can too, and start reaping the benefits a lot faster than I did.

All engineering, no English

I studied electrical engineering in college. It was a very intense engineering program and there was absolutely no development of communication skills—not even one English class. I came out of it believing that if you explained things logically and rationally, people would always understand and agree.

I got my first clue this might not be true pretty fast. My first job out of college was in the R&D center at the Saturn car company. This was a startup within General Motors and it was very exciting because we were going to reinvent the auto industry.

I naively thought I was going into design. As soon as I got there, I started to ask questions such as, "Don't we design the detail of this electrical circuit down to the resistor and capacitor level?" The answer was, "No. We assemble sub-assemblies from different suppliers into a car."

So, what I ended up doing was doing supplier selection. That’s how I got into procurement. I enjoyed the analytical part of comparing suppliers. But I had a series of rude awakenings that I might need more than analytical skills in order to accomplish my goals.

A warning light on Saturn

My first project was to partner with a 25-year United Auto Workers veteran to build an electronic device to control the lights in the car. I presented him a whole set of drawings and specs and basically told him to go implement it. It seemed like he didn't understand, or he was being obstinate, or he was mad at me. I wasn’t sure which, so I decided to talk to him.

I probably came off as arrogant, trying to order him around and that's just not how you treat a UAW member--or anyone for that matter--but in that context, there was even more of a need to bridge between union and non-union, that I was completely oblivious to.

The guy actually yelled at me and told me I needed to learn how to run a project. I was mortified. He didn’t go into specifics, so I didn't at that moment deduce what my fatal flaw was but to this day I remember that conversation and the way I felt.

After working for a few years, I went to business school, where I was around people from a variety of backgrounds. That helped me to see things from different perspectives but it was frustrating because we had to do a lot of group work. Engineering school had not required any group work at all.

Group work seemed disorganized and inefficient. I realize now that people were building bonds, but to me it just looked like we were not making progress on the project. I spent zero time trying to get to know the people in my group. Then I came in with the project plan, which I thought would save the day, and they reacted as if I was trying to rush in and take over. It was starting to be a familiar struggle.

After graduate school, I worked at Sun Microsystems. My boss there sent me to charm school, although I didn't know it was charm school since it was billed as a leadership development course.

As part of the course we had to read a book called "Emotional Intelligence." I hadn't even heard of it, of course. I thought it was a bunch of hogwash. Then we had to take a test on it. There were all these wishy-washy questions such as “If you know that your coworker feels differently about a project than you do, do you discuss it with them, or if you already have the right answer, do you just go tell your boss?” Just go tell your boss. Duh! The whole thing made me mad.

I was the only person in the “scored under 25” corner. The instructor talked to each group in turn and finally got to me. "What did you score, person in the corner?" he asked. I said eight, and the whole place erupted in laughter.

Now I was humiliated and really mad. But, your worst times are the ones that teach you the most. As upset as I was about the whole experience, I understood that there was something I had to figure out.

It was also around this time that I started to learn from my wife. She was a nurse and as most nurses are, highly emotionally intelligent. She tried to convince me that emotional intelligence was important for our relationship, and for all my other relationships.

But you can't take a left-brained guy who aced engineering because he was so good at individual problem solving and convince him overnight that working on emotional intelligence is anything but a waste of his time. I did work on it, and when I did I would have better and more satisfying interactions with her. But I also continued to have difficult interactions with her and other people and I had this nagging sense that I wasn’t doing a very good job. I wasn’t, because I wasn’t totally convinced it was important.

Then I had an aha moment. Early in our marriage, I was travelling a lot for business in Japan. I remember coming home and talking to my wife and rattling off the names of all the Japanese people I met and worked with. These were complicated, hard to pronounce names.

One night, she looked at me and said, "I can't believe you can remember all these complicated Japanese names, but you can't even remember the names of my relatives."

I Iooked at her and I thought, I'm an idiot. I spend the effort when I need to, to get my job done, but I don't spend effort on things just because they’re important to her.

How to load a dishwasher

I started learning her relatives’ names, of course, but I also started listening to learn what was important to her. For example, I used to explain to her how to load the dishwasher because I understood how the machine used water, hydrostatically spinning to clean plates and glasses, and she was just not putting things in the perfect order that would get them cleanest.

Then I took the same concepts to work. I was clumsy at first. I would say, "I'd like to understand what's important to you," but I came off as insincere because I didn’t have the skill down in a natural way. But I kept at it, with some successes and some failures. I learned the most from the failures.

Going out for beers

In particular I remember working together with this group of seven people. We had projects that overlapped and so we had to collaborate. I thought I was collaborating really well. But, in addition to the work we did at the office, they were having dinners now and then, or just going out for a beer after work.

I didn’t join them because I had little kids at the time, and I never wanted to miss a moment with them. But there was also another reason: I felt like it was a waste of time.

After about a year of working together, one of the gentleman in the group came up to me and said, "Dave, you need to realize that it's really important to go out for beers once in a while because then you get to know us, and we'll work better together once you know us."

I didn't say anything, but I was pretty upset. It took me quite a while to calm down and it wasn’t until days later I understood what he meant. That was a pivotal moment, because I realized the same thing that I learned at home was true at work.

I didn't know the names of his kids. I didn't know what he did for fun. What he was telling me is that having those beers is an opportunity to build a knowledge base of what people care about personally. That builds bonds, and that’s not a waste of time. Those bonds pay off in spades when you're trying to work with people, especially on tough things where there's controversy.

I started going out for dinners and the occasional beer. I started sharing more about myself too, because up until then I had been very private. I didn't talk to people about my kids, or my weekend. I just didn't understand why that would be important at work. But it is.

Up the ladder of success

I became more successful at work, very successful I would say, as a direct result of applying emotional intelligence in a role—procurement—where it is rarely seen. Specifically, I got really good at making change stick, so the company actually got the benefit they intended from transformation projects. Just implementing projects does not make you successful. When you can implement and get results, you're successful. I was able to parlay each success into bigger and bigger roles.

In procurement, we don’t often reach those top leadership roles because we’ve been stereotyped as those people over in the corner that just try to save money. Part of where that stereotyping comes from is that like me, we haven't been good at developing relationships and using emotional intelligence to understand the important things going on in peoples’ lives, or the important things going on in other parts of the business.

But this profession can be more, and procurement professionals can do more, and they can rise to the top levels of leadership. Let's not keep using the same strategy if it's not working. People care about cost savings, and they care about other things too. Let's use our emotional intelligence to figure out what those things are, and then link them to the things that we do. We’ll do better at work, and get more enjoyment out of life.