How Can Procurement Use Technology to Avoid Extinction 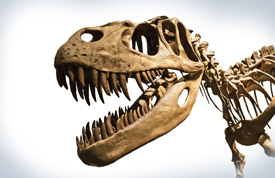 How can procurement use technology to create the future, rather than being driven to extinction by it? That was the subject of  “Don't Wish on an Asteroid: Death, Dinosaurs and Procurement,” a recent webinar featuring “dueling analysts” Jason Busch, founder of Spend Matters, and Duncan Jones of Forrester. Both men will be joining us for an “Expert and Analyst” panel discussion at Coupa Inspire later this month. Here are four key takeaways from the webinar that you can expect to hear more about at Inspire.

Online retailers have gone through massive change but have transformed the market for consumer commerce. “This market didn't exist two decades ago,” said Busch, “Yet, now everybody from millennials to our grandparents purchase online.”

What can procurement can learn from retail? Omnichannel thinking, for one. They need to think about how their customers access procurement services, and how suppliers can serve them through different channels.

Procurement could also learn from how retailers are using analytics, Busch says. For example, one large online retailer provides a dashboard where suppliers can see what's going on in terms of sales and even forecasts demand so they can react. Procurement should think about how they can provide this same kind of guidance to their suppliers.

Another way some retailers use analytics is to monitor what is being sold, and then knock off products and bring them to market on their own if they sense an arbitrage opportunity. Procurement might take the same tack, developing new suppliers in areas where there are a handful of suppliers who essentially amount to an oligopoly or even a monopoly, he suggested.

Jones added that online retailers also do a great job thinking about the individual who is buying from them and what their context is. Because of that, he believes sell-side sites will eventually win the user battle. “These sites understand exactly what I need,” he says. “They're developing mobile apps connected to intelligent back ends. They're personalized. So do I use the sell-side app that's really easy to use, or do I use the buy-side app?”

Don't fight this trend. Embrace it, Jones advises. “Where supplier mobile apps are better for your people, you've got to find a way to let them use them without losing the visibility and control.”

He envisions a situation where requisitioning approval is driven from the sell side app. This would allow procurement to get visibility of who's spending what based on email order confirmations rather than requiring the buyer to double-input into the system. It’s more pull-in rather than punch-out, with procurement capturing what’s been done after the fact. They get the data they need, without holding buyers back.

To prevent employees from ordering materials and services that aren't on the contract on sell side sites, procurement should look at a supplier's mobile apps and put some onus on them to enforce the customer's policies at the buying point. An API connection from the mobile app into the procurement system can check that there is a contract for that item, that the price is okay, and that it's within the employee's spend limit.

2. Focus on becoming a customer of choice

One key to not becoming a dinosaur is moving beyond a singular focus on savings to a broader focus on becoming a customer of choice. “The fact is that suppliers are most willing to share their ideas and co-innovate with the manufacturers who treat them best,” said Jones. “If we only deliver savings, there's a risk that we become a least preferred customer. Actually what we need to be is a preferred customer who gets the best ideas.”

“Becoming a preferred customer is as much about what you don't do,” said Busch. “For example, so many organizations treat an RFX as a means to specify exactly what they want. Flip that on its head and treat it as a discovery mechanism, instead of forcing suppliers down a certain mandatory path with it.”

“If you're inviting a new supplier to the table to participate in an RFX, email communication should not be the first time they learn about it. Becoming a customer of choice involves empathy,” he said. “It doesn't mean sacrificing the ability to negotiate, but it means being open. It means communicating. It's picking up the phone and actually getting out there to engage and bring them on board.”

Jones suggested that we drop the term “rogue” to refer to employees don't use the system, and instead look hard at systems and what they’re asking people to do. If procurement is struggling with rogue employees, maybe it’s time to have a look at the system.

“It's not a question of enforcement and beating them over the head,” he said. “It's a question of making the right way easy and the wrong way hard.”

If procurement doesn't get that, they end up issuing stupid edicts and pushing people to buy cheap items, but not the right items. For example, a corporate travel system may suggest flights that save small amounts of money by wasting hours of employee time. As a result, people become reluctant to use that system or take any notice of its suggestions.

One of the issues here is that some categories may not lend themselves to a one-size fits all system. This is where the sell-side vendor who is building an app that's particularly designed for a specific item is able to deliver the recommendation engine that absolutely gets it right.

Both Busch and Jones agreed that procurement must think carefully about how they communicate and market themselves to the organization and to suppliers, although they disagreed about whether a name change is in order.

“One of my colleagues won a contest once around what procurement should be called if we don't call it procurement,” said Busch. “He came up with ‘external resource management.’ The concept is fascinating. I don't think the name matters. But, we do need to think philosophically around the role of procurement and how we explain it.”

For Jones, a name change might be in order, since procurement does have negative, pejorative connotation in many organizations.

“I think a name change signals a change in the attitudes and the goals of the organization,” he said. “I don't think it matters exactly whether you call it resource management or supplier management or just Fred Bloggs. The fact that you've changed the name and publicized new goals and worked out some new KPIs, that's what's most significant, I think, for showing that you're not dinosaurs.”